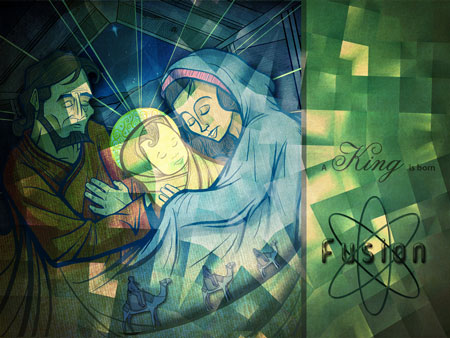 Emmanuel, God with US

God Wants To Be With US

We pretty much have a routine that our kids are beginning to grasp here in New Braunfels.  Laura has been under the weather this year, but that doesn’t stop Katie and Noah from requesting a visit to Wassailfest.  It is awesome looking through the eyes of little kids.  Noah, my three year old, came around the corner Thursday night and shouted in excitement, “It’s Christmastime!”

This year Mommy was not the only one excited about getting down the Christmas Tree and all the decorations.  Before she could even say anything, our little five year old set the tone for the family.  SHE wanted to top the tree this year, and she did, on Daddy’s shoulders.  So we got the inside decorated, and we were driving home from Church the next day, and Katie says, “WE need Christmas Lights on the outside of our house now!  Ours is BLANK!”

I love that Katie and Noah are thinking on their own and learning new things.  They really have this thing about just wanting to be with Mommy or Daddy, almost all the time.  That is both good and bad :).  A very special BE WITH Time, though, is usually bed time.  Noah is easy, he usually wants his little blanket and stuffed animals (it is like he is making an ark of his own) and asks for a drink of water and snuggles up under his big Spiderman Blanket and goes to sleep.  Not before he calls me some three year old name like “Silly Cookie” or Good Night “Woody” referring to Toy Story.  If I lay in his new “Big Boy Bed” he usually says “Get OUT OF MY BED!”

Katie on the other hand milks the exclusive BE WITH time for all it is worth.  She loves it when Mom or Dad lay with her and talk a little, snuggle a little, look at her American Girl Doll, and listen to a Kids Christmas Musical on the CD player that she has requested… since October.  I sort of feel good when she tries to pull me back as I try to leave.  I think its because we both like to have a little quality BE WITH time.

WE
Looking at my kids and thinking about where we come from, it makes sense that a relational God would make people like you and me with a craving to BE WITH someone, anyone that would love and accept us.

I mean, this BE WITH craving really took off in the cyber world of Facebook and Twitter.  I know that probably most of you have requested some amazing Cell Phone for Christmas so you can have a REAL SOCIAL LIFE and text your friends.  Now you can even skype or have “face time” on your iPad and video chat.  I think this all has to do with a BE WITH FACTOR in all of us, and the truth is, you have all that, but get most satisfied when someone is actually WITH you.  Actually PRESENT.  In front of you.  Face to Face.  Real in person like.

God created us to be relational beings.  He set the BE WITH FACTOR inside of us.  A craving for real relationship.  How about that girlfriend or boyfriend of yours, or even a crush.  It doesn’t satisfy you just to text him or her, you really want to BE WITH that person.  If you really think about it, you are probably planning amazing moments in your head revolving around the next time you are going to actually BE WITH him or her.  Maybe that is why you actually like school.  You are a 6th grade guy that thinks he is in love with your Math teacher, and you are planning every moment just to BE WITH her as she teaches you addition subtraction.  One word – TUTORING!

It is funny, though, we lose that thought when it comes to knowing God.  When we think about God, we tend to forget that he really just wanted to BE WITH His Creation.  In the Garden of Eden, He walked and talked with Adam and Eve. Then sin separated us from God.  I think sometimes, we think of Him watching us from afar and not really interested in our daily lives.  That is where this amazing Christmas Story proves us wrong.  THE GREATEST STORY EVER TOLD begins with a promise in the old Testament.
Isaiah 7:14 says
“14 Therefore the Lord himself will give you a sign: The virgin will be with child and will give birth to a son, and will call him Immanuel.”
There had been a hope throughout history that hinted about GOD BEING WITH US.
So lets read out of Matthew and think about GOD BEING WITH US.

18 This is how the birth of Jesus Christ came about: His mother Mary was pledged to be married to Joseph, but before they came together, she was found to be with child through the Holy Spirit.

19 Because Joseph her husband was a righteous man and did not want to expose her to public disgrace, he had in mind to divorce her quietly.

20 But after he had considered this, an angel of the Lord appeared to him in a dream and said, “Joseph son of David, do not be afraid to take Mary home as your wife, because what is conceived in her is from the Holy Spirit.

21 She will give birth to a son, and you are to give him the name Jesus, because he will save his people from their sins.”

22 All this took place to fulfill what the Lord had said through the prophet:

23 “The virgin will be with child and will give birth to a son, and they will call him Immanuel”–which means, “God with us.”

24 When Joseph woke up, he did what the angel of the Lord had commanded him and took Mary home as his wife.

25 But he had no union with her until she gave birth to a son. And he gave him the name Jesus.

You see, Joseph was pledged to BE WITH Mary.

from the time he was a young boy. Mary’s cousin Elizabeth was married to a priest,

indicating her family’s values. Jesus would grow up in a loving home that observed the

Jewish laws. But Jesus was conceived in a way that appeared to conflict with those

“engagement” period. Mary and Joseph did not live together, but their betrothal was an arrangement so binding, that it could not be ended except by divorce. When Joseph found out Mary was pregnant, the Oral Law gave him an additional option. He could have had Mary killed by stoning. Yet Scripture tells us that Mary was “highly favored!”  Scripture says the Lord was with Mary . . . and the Lord was with Joseph. The presence of God enabled Joseph to believe and trust that the rules of his religion were to be submitted to the Author of his religion.

YOU
GOD WANTS TO BE WITH US!
When Sin Separated us from Him, he found a way to get reconnected again. He took on flesh, played by his own rules He created for mankind, and actually became a man, just to BE WITH US!  Some day we will be in the New Heavens and New Earth and there will be the same relationship Adam & Eve had in the Garden.  We will be God’s people and He will be our God.  That is why it is the GREATEST STORY EVER TOLD!  God made a way to redeem us by sending the Son of God.  Born of a virgin.  A king is Born.  One that will rule over our lives forever, and He knows how we feel.

WE
So if God wants to BE WITH US, the question is do you want to BE WITH God?
In other words – To BE WITH or NOT to BE WITH… THAT IS THE QUESTION!  He pursued us in the most miraculous way.  He wants us to have some exclusive time just talking about life, enjoying His Presence and enjoying the RELATIONSHIP.

What do you desire for Christmas???

This Christmas novelty song was written by John Rox and performed by the ten year old Gayla Peevey in 1953.

Peevey was a regional child star of the Oklahoma City area. When released nationally by Columbia Records, the song shot to the top of the charts and the city zoo acquired a baby hippo named Matilda.

A popular legend holds that this 1953 hit had been recorded as a fund-raiser to bring the city zoo a hippo; but in a 2007 radio interview with Detroit-based WNIC radio station, Peevey clarified that the song was not originally recorded as a fundraiser. Instead, a local promoter picked up on the popularity of the song and Peevey’s local roots, and launched a campaign to present her with an actual hippopotamus on Christmas.

The campaign succeeded, and she was presented with an actual hippopotamus, which she donated to the city zoo. The hippopotamus lived for nearly 50 years.

This Christmas, Jesus wants to give you more than you desire.

Hey Middle School Parents, have you talked to your son or daughter about the importance of the Virginity of Mary?

This is the Christmas season, why is Pastor Brandon posting something like this to make my life as a parent EVEN MORE AWKWARD?

1. Here’s the deal, we are saturated with a culture that speaks out against this train of thought. If the issue of purity is not brought to the attention of your middle schooler, they may not consider how important it is to God.

2. God’s word points this out, so we should as well.

He will be great and will be called the Son of the Most High. And the Lord God will give to him the throne of his father David, and he will reign over the house of Jacob forever, and of his kingdom there will be no end.” And Mary said to the angel, “How will this be, since I am a virgin?”
Luke 1:32‭-‬34 ESV
http://bible.com/59/luk.1.32-34.ESV

Consider John Piper’s words on The Virginity of Mary

The virginity of Mary is important for two reasons.

1. She Is Sexually Pure

a) It means that she’s sexually pure. She has not slept with her fiancé, or any other man. That would have been fornication, and God abominates fornication.

Of course, not every woman in Jesus’ lineage is so clean. There was Bathsheba the adulteress and Tamar who seduced her father-in-law. These things can be forgiven, as many of you have discovered. But don’t overlook the importance of Mary. When God chose a mother for his Son, he chose a virgin. Virginity before marriage is important because the recipient of God’s best gifts ought to be pure.

Mary’s virginity is also important because it meant she wasn’t pregnant. God aimed to make known that the conception of Jesus in the womb of a woman was owing to no man. So he chose a virgin. And a virgin conceived a child whose Father was God and not man.

In a world of sexting, sexual promiscuity, and curiosity, God’s Word points to a different standard. A standard that allowed Jesus Christ to enter as the greatest gift to humanity.

Purity is the perfect package for the gift of our Savior to our world.

Okay parents, AWKWARD Christmas Challenge: Talk about the importance of the virginity of Mary.

(Go ahead and catch them off guard with it like they spring crazy, awkward questions on you!)

Fusion Will be back for the New Year!!!!

We Jump back in to Fusion Sundays January 6 .

We will provide food, have open Gym Time + Dodgeball and end with some Christmas Treats.