What the Pope & Instagram Teach Us About Connecting with Students

I’m sure the headline above appears a bit random. Is there really a common denominator between the Pope and Instagram co-founder Kevin Systrom?

About a month ago, Instagram’s CEO and co-founder Kevin Systrom met with Pope Francis at the Vatican for the very first time. You already know, not everyone gets an audience with the Pope. What was the purpose of their meeting?

They met to discuss the power of images.

Instagram is now the fastest growing platform for social media sharing among the younger population, passing up Facebook from just a few years ago. Facebook remains the largest social media site, but it’s significant that they were smart enough to buy Instagram, foreseeing the trend toward posting and sending images over words. Systrom asserts they intend for Instagram to be the “dominant platform for visual communication.”

So, let’s listen in on the conversation between the Pope and Kevin Sysyrom. There were at least three realities that emerged as they conversed that we can integrate as we teach and lead students:

What Pope Francis and Kevin Systrom Reveal About the Power of Images: 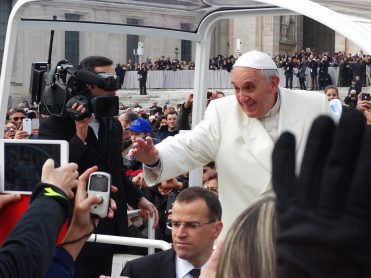 This is literally what Kevin Systrom said to TIME magazine, which reported the meeting between the two leaders. Here were two men—one corporate, one sacred—connecting over a curated set of pictures that Systrom brought with him. He suggested that images unite people from different ages, different cultures and across all borders. Just think about international traffic signs. We’ve gone to images or icons because we all recognize their meaning, regardless of our language or culture. These images bring people together.

The set of images Kevin brought to Pope Francis told the stories of recent tragedies that people from all over the world had endured—pictures from the exodus of immigrants from Syria to Europe, to the Nepalese earthquake and its aftermath. In a picture, we can unveil so much without even saying a word. Images become the language. I remember pictures from history that connected me to the story of my country, and the narrative of my past.

Finally, images can communicate a truth, whether it’s simple and straightforward, such as the trending photos of Taylor Swift’s 1989 tour., Or they can communicate pain—like the aftermath of the terrorist attack in Brussels, Belgium. They can also communicate hope —like the images of so many who are aiding refuges internationally. Images have the power to make us laugh or learn. Through symbolism, images often represent a truth or remind the viewer of an important axiom. And because they’re a metaphor—they’re disarming, even as they teach.

So What Do I Do with This Information?

These are but a handful of reasons I chose over the years to leverage images and narratives to teach leadership and life skills. They engage both the head and the heart—both hemispheres of the brain. Images make you think and feel at the same time. Each of our images, called Habitudes® (images that form leadership habits and attitudes), actually represent a timeless truth we believe the young must learn in order to lead themselves and others well. Since 2004, when we published the first Habitudes book, it’s been remarkable to see how memorable they are once students learn the truth that is captured in the image. I just spoke to a thirty year old who learned some of the Habitudes images back in college, a decade ago. She still remembers and uses them to this day.

So how do images impact our everyday lives?

If you’re communicating with colleagues, a study done by Social Bakers last year exposed the visual nature of social networking. The study indicated that photos trump the market on Facebook, making up 93 percent of the social network’s most engaging posts.

Research from Skyword found that when you’re sending a message—if your content includes compelling images, you can average 94 percent more views than your boring counterparts. Our eyes are drawn to visuals.

If you’re looking to get your message noticed on-line, a study done with Google+ users  revealed that images play a role in providing visual cues to grab someone’s attention on-line. Researchers found that a post on Google+ was three times more likely to be re-shared if it included an image.

So, what are we waiting for? It’s time we include images as we communicate. Get the picture?